See how much the top 20 soccer stars earn

For many years, ever since the addition of private money, football has changed. Once the ‘people’s game,’ today football feels far more like a game of trading cards. Millions goes through the economies of the major footballing nations, sometimes billions. The sheer scale of money – from the weekly wages to the price per ticket for a fan – means that, to some, the top level football we all used to love has lost some of its original luster. 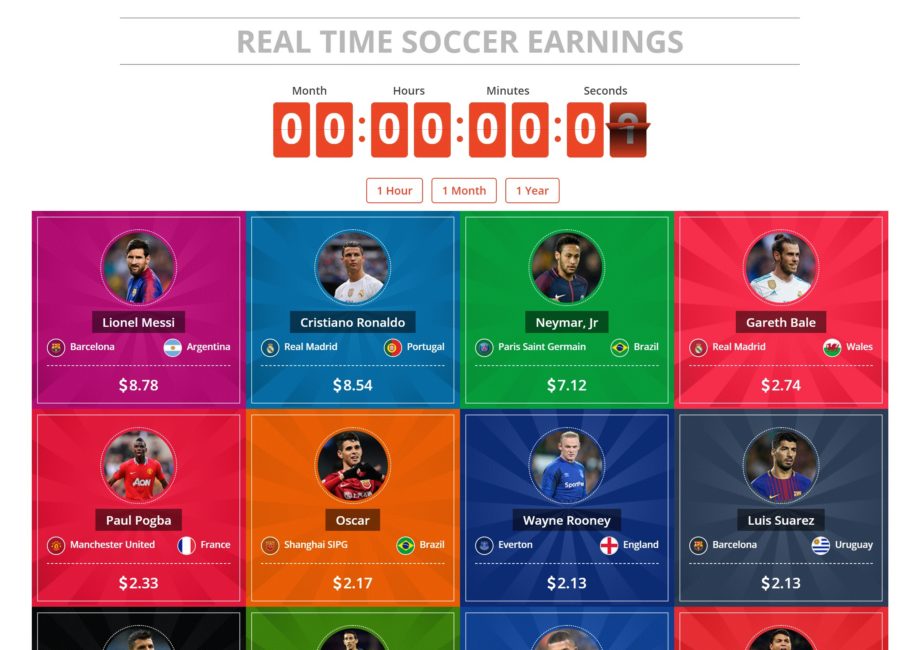 The easiest way to see how football has changed, though, is when you see just how much the biggest names in the sport earn.

Who is the top earner in soccer?

At the time of writing, the amazing Lionel Messi is the highest paid footballer on the planet. The FC Barcelona legend is arguably the best of all-time, and is able to back that up by bringing in around $12,636 every single hour. Despite recently scoring his 400th goal for Barcelona, that seems like an insane amount of money to be paying any one star!

However, if you look at FCB before his breakthrough and the club they are today, they are barely recognizable. In his career, Messi has seen Barcelona turn into arguably the biggest club in the world, at least before the UEFA Champions League dominance of arch rivals Real Madrid.

We know how much that Messi – and the other top twenty – earn in football thanks to a new infographic produced by Betting Sites UK. It’s a fine example of where all of that effort and dedication is likely to get you if you are willing to put in the effort.

Can football ever return to the old ways?

It’s very unlikely. The injection of private finance into football has been going on for decades. In fact, ever since football was slowly but surely professionalized across the world, the money has gone up and up. Big companies see the immense viewership ratings, and are happy to plow millions into their advertising schemes.

Today, political bodies and oligarchs are happy to buy into the football world, using their finances to help turn dreams into reality. Several clubs in the last 20 years – Chelsea, Manchester City and Paris Saint-Germain to name but a few – have gone from being also-rans in their leagues to among the most powerful clubs in European football.

The money is insane. Turning that money down is very hard, too: the tax revenues produced by football alone runs into the billions worldwide. While the money divide in the game has often led to problems with fairness and competitive imbalances, it is very much fair to say that football has changed and improved tenfold due to the money on offer in terms of physical and technical quality.

Some dislike the modern era of football, with the sums of money outside of the realms of reality. For the players, though, it’s the perfect balance: live the dream of playing football, and earn millions for doing so. For those in the Top 20, why would you change a thing?